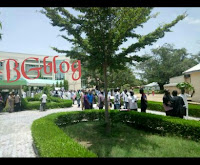 FedPoly Bauchi finally embarks on indefinite strike after warning strike few weeks ago with a lot of students and parents showing dissatisfaction over the issues which seems like lost battle between the ASUP and outgoing Rector DR. Shuaibu Musa, Earlier today some of the students still around school environs came out In masses to protest as they match towards the Rector’s office.
Our cameras was able to capture some live footage at the polytechnic.
Check pictures below…

According to our sources meeting was held today at the school by the school ASUP.
Ahmed Mukaddas, chairman of the union, told journalists in Bauchi that the decision to go on the strike was taken at the congress held on Tuesday.
Mukaddas accused the rector, Shuiabu Musa, of non-payment of accumulated 27 months academic allowances.
Others are non-implementation of the July 2014, 2015 and 2016 promotion; non-payment of enhancement arrears and arrears of short fall in their salary since 2016.
The other demands include non-payment of CONTISS arrears for the lower cadre since 2013; the actual number of staff on the payroll of the institution; improved student’s welfare; unused personnel cost amounting to N24 billion between February 2017 and August 2017.
The union also accused the rector of not organising convocations in the last seven years.
He also alleged that there were inadequate laboratories and workshops in the institution; illegal recruitment of staff; total collapse of the security system in the school and urged the management to stop the deduction of 7.5 per cent from staff salaries.
The chairman said the union would not accept any attempt by the management to force them to call off the strike until their demands were met.
Mohammed Wada, the public relations officer of the institution, told NAN that the management was in a meeting trying to see how they could address some of the demands by the union.
“As I am talking to you, the entire members of the management are busy trying to see how best to tackle some of the demands made by the union,” Wada said.